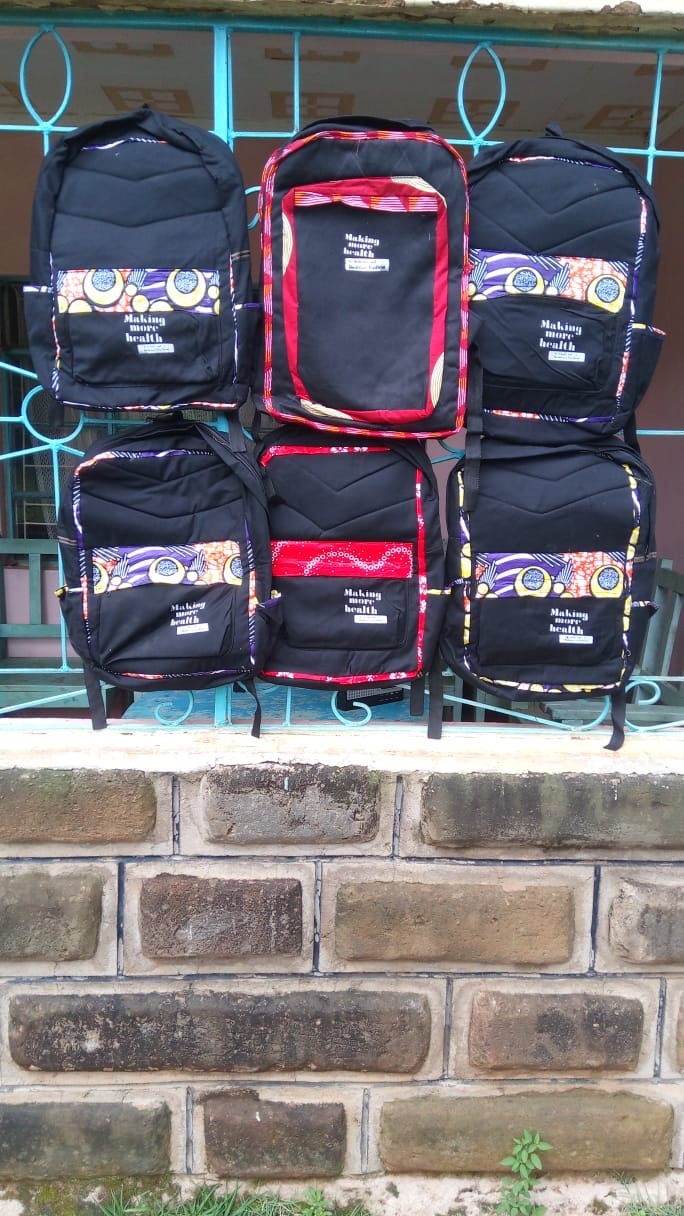 Our farmers, close to Webuye in Western Kenya are organized in cooperatives. They are one of the communities we work with under the umbrella of our Making More Health initiative. When I visited the Kibisi Farming cooperative group the last time we launched together with employees from Boehringer Ingelheim and local trainers regular farming training sessions. This has helped already a lot to get some better farming results. Due to the need of a better hygiene we had also a session together and the farmers learned on how to produce soap. We had a lot of fun together, started to trust each other…

In parallel, we developed together the idea that these farmers, especially the farmer women could also produce some school bags for our Making More Health school. We build in the same area a school, substituting a very old dangerous building for 750 students from class 1 to 9. The bag production creates some additional income for their families.

Why to buy it elsewhere and then hand it out as a donation?

Doing something useful, doing it accordingly to the own culture, and the joy to produce something useful is much better than getting donations. While doing so there is also a big learning effect – for all. And besides: The pride of doing so is around. It is not about giving bags to them, not that kind of relationship of donor and recipient, but about growing something better together. It is – at least partly – their own children who will go to the new school. Many children have no school bag… The school building is there. As soon as the crises will pass, hopefully, we can inaugurate the school … many children will get also school bags, made by their own communities.

What we did not know was that with the crisis of COVID 19  this production order that we have started just a few weeks ago would help the farmers to earn some money to survive and become very important.

The situation is very critical. Many people suffer from hunger and have no income any more. Also our farmers have a lot of challenges. The huge rain falls , the curfew and generally the economic situation at the moment is very bad. Feeding the animals, paying seeds and having enough food for the families is a huge challenge.

The production of these bags will help not only the children, but also the families. Aren’t the bags looking really nice?

What we have learned from that

It is important to engage the communities themselves we are working with. They “own” it and can bring in their own experiences, work and they are proud of it. They take care. They co-create together and with us. The relationship is a trusted one, a relationship of respect. It’s about empowering, not about dependency. Doing it with the people, not for them is key.

The community with people with albinism (who normally are seen as bad or strange, often victims of violence because people don’t understand the genetic condition and a lot of superstition is around) has produced the school desks, the farmers in the same region have produced the bags and helped also to build the school.

A positive side effect: farmers and people with albinism have run health trainings together learning about albinism – and more health.

Learning by doing, trust and cross-thinking are great elements to succeed.

Sometimes there are side effects like this additional income generation project of school bag production that become very important in certain situations.

Thanks to our farmer women! Well done! We hope that we can meet soon again face to face – not only, but also because I like to buy such a nice bag from you, too!