Sometimes change happens slowly, sometimes it can just take a few days. But always it depends on people who decide to make a difference.

Thanks to my colleagues at Boehringer Ingelheim and the money they donated. And thanks to Chris, our social worker and Making More Health partner on the ground.

For sure, we cannot change the whole world, but we can do so much for individuals who suffer and while doing so making the world a better one. It does not even take a lot.

Daily challenges of a woman with albinism

Only a few weeks back I met her the first time. That’s when I knew about her daily challenges as a single mother with albinism who had no idea on how to feed her children, on how to avoid that strangers entered her home in the night and raped her based on a superstition that sex with a person with albinism can heal AIDS, how to repair a licking roof and house which seems to scroll down soon. No idea on how to get a chance and a little bit of hope that one day things could get better.

“Most of the days me and my children eat what is left on the roads where people do markets. Often I try to resell a few tomatoes or vegetable people give me. Then I gain 20 or 30 KES…,” she says.

A life without hope and dignity – only because of a genetic condition that says you are born with no melanin. A condition that just requires good sun protection and some glasses. A condition based on one recessive gene that if it is combined through both sex only, can lead to a baby with albinism. White colour. And change again in next generation. Black colour.

But many people in Africa don’t know. Often families accuse the women to be responsible for a “white” child. They ban people with albinism from society, hurt and abandon them, kill them.

“She was born out of wedlock, and she was rejected by the parents. She was brought up by the uncles who kept tossing her around. Only taken to school up to class 8. She was using brail because she is partially blind. She has being hosted by a good Samaritan who has opted to give her shelter with her 3 kids. She has no land, and her to school going children are under the mercy of the church.That door is not lockable hence the abuse she gets from strangers who rape her at night. Hence all the kids,their fathers are not known as they are strangers from town. Food and other basics are a big problem… , explains Chris, our local partner and social worker on the ground.

With the very active support and help of Chris who runs now regular meetings with her and other people with albinism, with the involvement of the governmental social welfare officer and with some small amount / donation money from my colleagues at Boehringer Ingelheim today it looks differently.

It took two weeks to set this up. Or better some hours in the last two weeks to talk and understand, to bring the people together, to collect the money. Nothing really big for us. Easy in terms of making concrete change happen. But it needs people who care. People who do it. 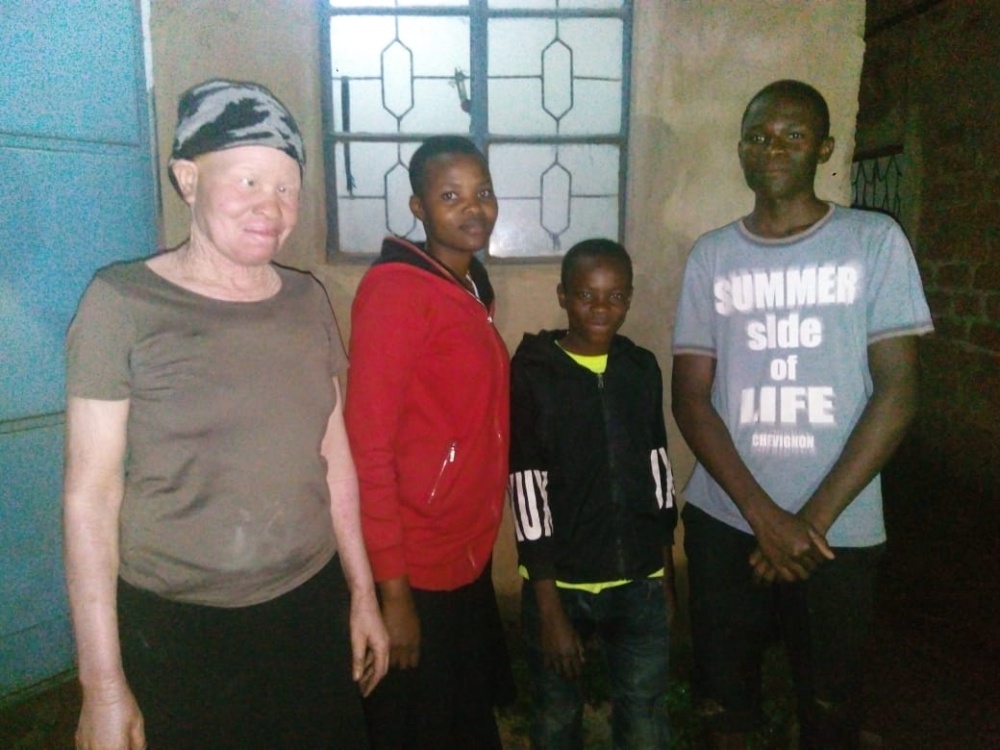 Sure, there is still a long way to go. But there is hope.

She can live now with her three children in a decent small house. Lockable. And dry. There is some food. And the enormous willingness in this family to become self- sustainable:

“We will try with a small poultry farm. This will guarantee our daily food soon. And the payment of the rent. We will also learn together with some other people with albinism on how to produce something. Tailoring. Bead making. Other ideas. So that we have a second income source. My kids should have a better life…”, she says and smiles.

First steps to support people with Albinism in Webuye